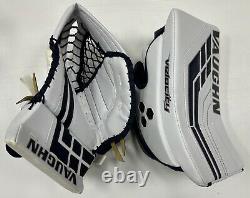 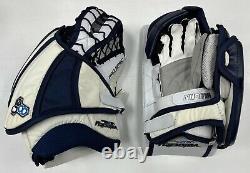 This Listing is for a Brand New Senior Vaughn VE8 Pro Carbon Blocker catcher Set. The set is White/Navy as shown above. This set is Regular hand (glove held in the Left hand, blocker held in the Right). Both blocker and glove conform to all sizing regulations of.

Hockey Canada, USA Hockey, and the IIHF. The VE8 glove is a continuation of the V7 XF glove and follows the feel of its predecessors. The face of the glove features a new graphic which is a slight departure from the graphics Vaughn was using before.

Now, there are harder edges and lines instead of the smooth lines they were known to use. This graphic is purposely designed to be visually distracting to the shooter by creating large breaks in the lines to create a "netting" type look. First, the glove has a true two piece double cuff and thumb mold, contoured to the shape of the hand to maximize surface area. Inside of the cuff and thumb is Vaughn's carbon material which extends through to the palm further protecting the goalies hand. Extra finger reinforcements add to the rigidity towards the finger side which fights against potential finger curl.

The VE8 features a new. Double T to give a visually wide pocket, but comes together as a Single T when it connects to the perimeter.

This new design allows for a super snappy closure due to the removal of material that could bunch up when the closing the glove. The inside of the glove features a full grip interior to give the goalie more grip while still offering the traditional Vaughn feel. Along the internals of the glove there are raised finger rails to allow for extra grip and strategic straps designed to further keep the hand in place. These straps are located across the back of the finger digits and across the back of the hand.

Finally, a large dual wrist strap is attached to give the glove a completely custom and secure fit. The glove now features an extra wide four piece backhand protector which is designed to give the glove maximum amounts of flex when being closed, but also protect the in any RVH setting or when covering the puck. New for the VE8 model, you will see a new hybrid-esque Double T which files into a Single T where it connects to the perimeter. This new design helps create visibility into the pocket, matched with a soft style catch without the extra bulk of 2 spines hindering closure.

The Vaughn VE8 goalie blocker features a VX suede palm that has a grip zone to make sure that the goalie has the best grip on their stick, even when the palm is wet. This palm is also attached slightly higher on the blocker board (think more towards the ramp of the blocker) with four attachment points allowing for further reach past the fingers when the goalie is extending to make a save.

As previously mentioned, the VE8 Carbon Pro senior blocker features Carbon Enhanced Performance throughout the blocker. This is included in the finger protection where 3mm of carbon fiber resides, as well as through the sidewall and bindingless face of the blocker where the Full Pro spec construction resides. The VE8 Pro Carbon senior blocker gives goalies the traditional soft Vaughn feel that they are looking for, with the decreased weight and material improvements that modern blockers bring to the table.

Not the size or dexterity you're looking for? Add each item to your cart. Based on your entire order.

This item is in the category "Sporting Goods\Team Sports\Field, Ice & Roller Hockey\Goalie Equipment\Gloves & Blockers". The seller is "hockeyplusmore" and is located in this country: US. This item can be shipped worldwide.